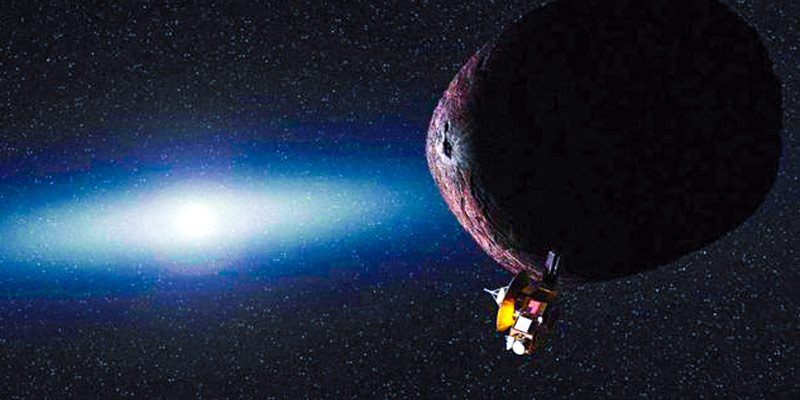 NASA’s spacecraft, New Horizons, quickly passed by Ultima Thule on 31th of December 2018; it flew around 2,200 miles(3541 km) from its surface. The collected data helped scientists understand how the solar system looked in the past.

Ultima Thule has spent 4.5 billion years frozen in Kuiper Belt — a doughnutty-looking region beyond Neptune, where we can find the remains from the beginnings of our solar system.  After the initial analysis, the scientists found that its surface was hardly heated by the Sun, which is four billion miles away. An investigator for New Horizons, Alan Stern, said that scientists so far haven’t seen anything like this. It has the same shape as it had in its early days.

Ultima Thule is a contact binary object, which consists of two solid parts. Scientists are convinced that they have formed separately through the accumulation of small particles, and eventually joined in one object.

These new findings rest on 10% of the data assembled by New Horizons. Moreover, a full download will be completed at some point in 2020.

Here is the list of seven things we were able to learn about Ultima Thule:

It Has Been Intact for More Than 4 Billion Years

Due to its distance from the Sun, it receives 1,900 times less sunlight than the Earth. That allowed Ultima Thule to preserve its shape even after the birth of our solar system.

While it was orbiting the Sun, some of its parts were receiving sunlight for decades, while some weren’t. Scientists believe that these variations in temperatures impacted only the lower surface layer of the Kuiper Belt.

The bigger part is called “Ultima,” and the tinier one “Thule.” In this area of Kuiper Belt, collisions happen at high speeds, but this object doesn’t show signs of strong impact. Scientists believe that these two lobes should have been heavily damaged. They assume that due to traveling through gases that weren’t released from the solar system, these two objects lost momentum. A planetary scientist, Cathy Olkin, said that Ultima and Thule exchanged energy with other small objects, pushing them out of the way as they were coming closer to each other.

Although many objects in the Kuiper Belt region have satellites, Ultima Thule doesn’t have any. New Horizons had searched around these lobes, and it hadn’t found anything.

There Aren’t Many Signs of Depressions

Both Ultima and Thule appear to have craters, but scientists have identified only two craters in the depressed region on Thule called “Maryland.” There might be a smaller number of objects to collide with, which would explain why there wasn’t a lot of craters. Gundy also added that when there aren’t so many objects, they crash at lower speeds.

Ultima Thule doesn’t reflect more than 12% of the light that touches its surface. Additionally, its surface has three kinds of shapes: elliptical, lines that are slightly curved or straight, and scattered regions. The most illuminated spots can be found on Maryland, between the space of these two lobes, and at the equatorial end of Thule. However, Stern is not sure how this occurred. She said that this was connected to low regions.

There is evidence that water exists on Ultima Thule, but it is not rich in it. Grundy put forward a possible fact that since it is very cold there, water hasn’t evaporated, and she suspects that it can be found under other the surface, or that it is merely limited.

Ultima is shaped like a pancake and Thule like a walnut. A scientist at John Hopkins University, Hal Weaver, mentioned that this flatness could have happened because of natural variability during its formation when groups of small particles crashed around a big mass. After all, things move in the preferred direction at a specific speed — that is what gives Ultima its elongated shape, said Weaver.